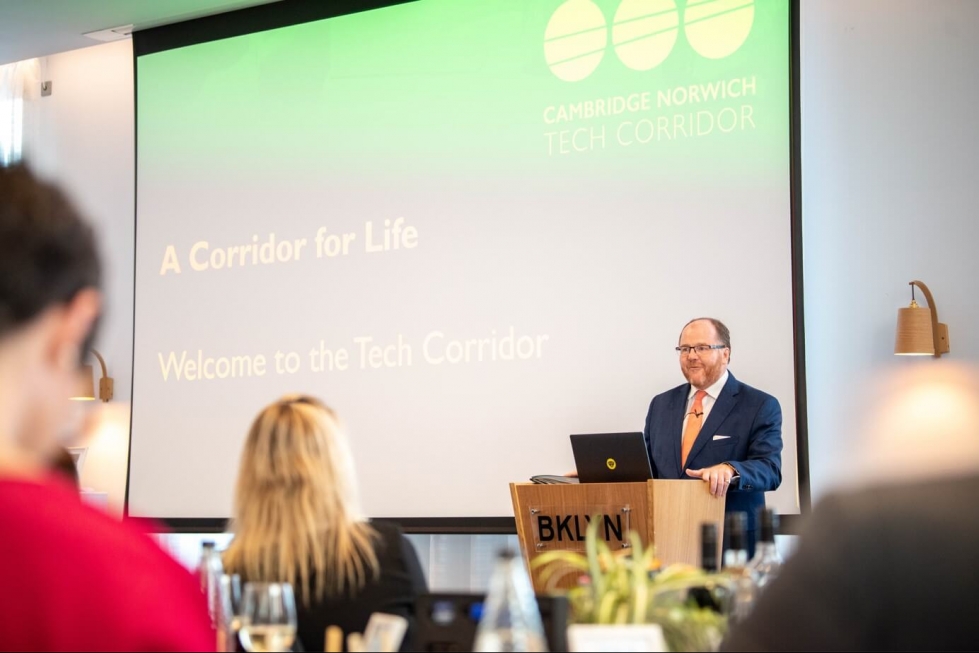 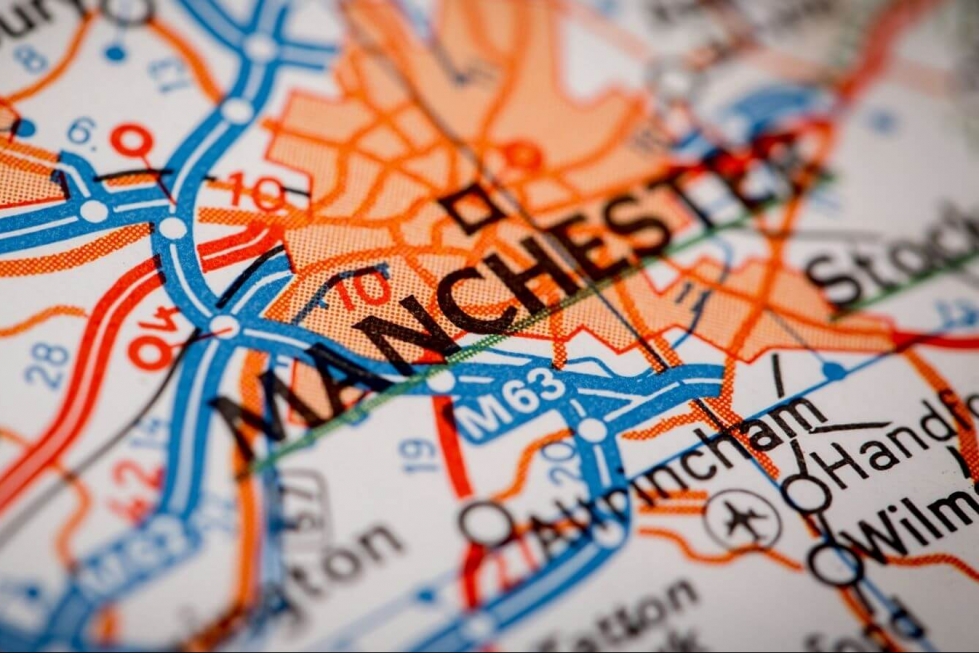 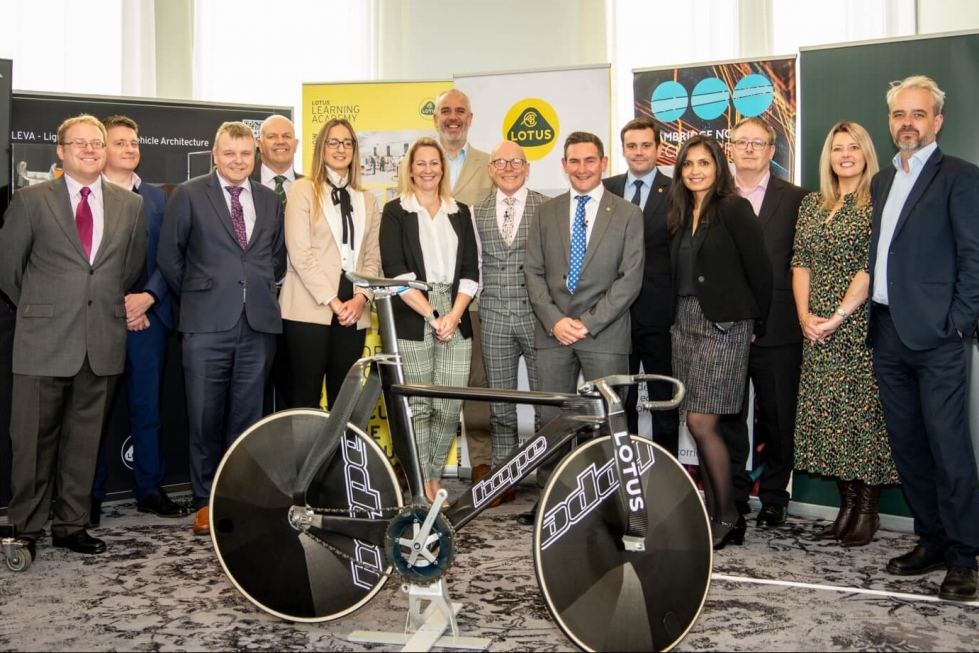 Key assets in the Cambridge Norwich Tech Corridor are helping to strengthen the UK’s economy at a critical time, business leaders and politicians have told a major conference in Manchester.

These include its proximity to global logistics gateways like Freeport East at Felixstowe and its hosting of world-leading science and MedTech clusters, which have played a critical role in the combating of Covid and this region’s economic recovery.

Supporters of the Cambridge Norwich Tech Corridor (CNTC) hosted an event entitled ‘The Corridor of Life’ in Manchester this week to showcase the breadth of opportunities across the region. 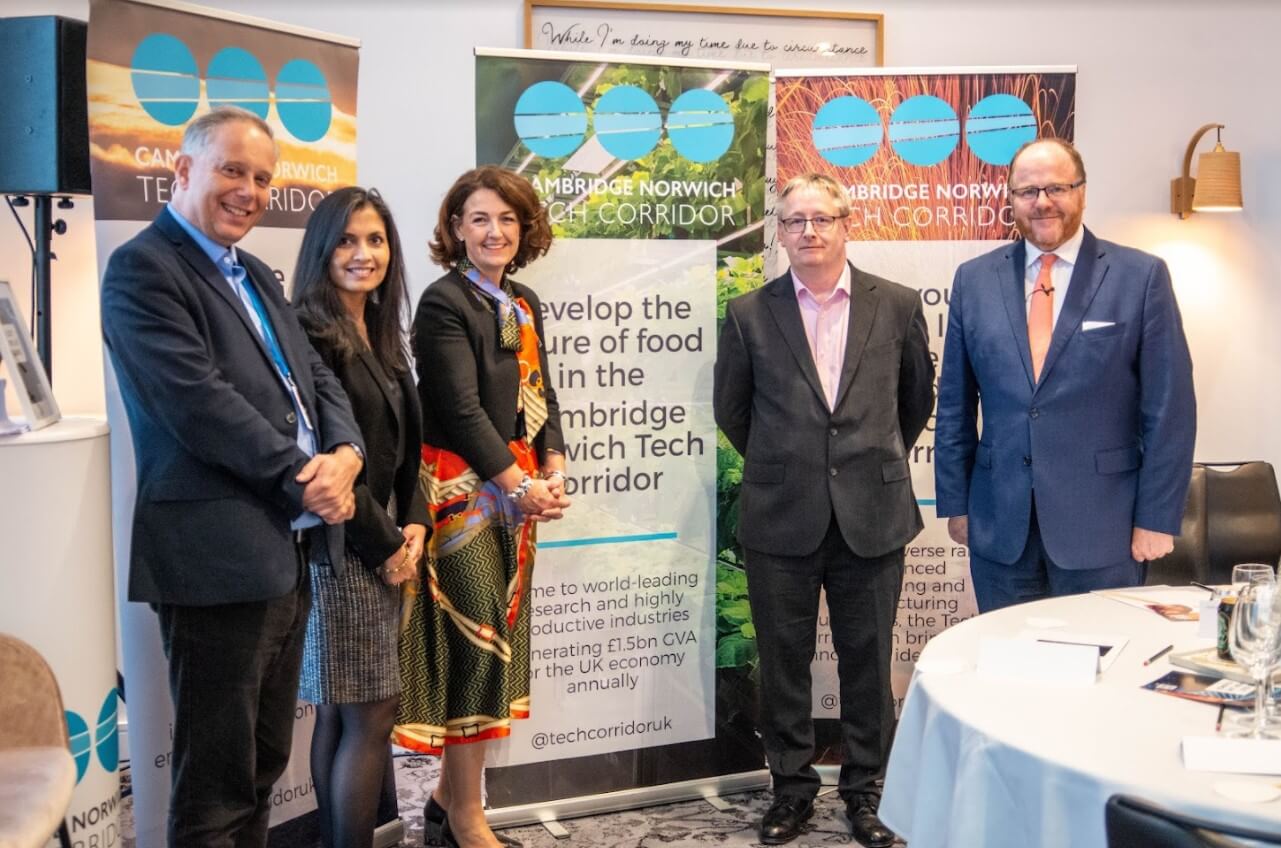 “This was a great opportunity to share the work we are doing at The EpiCentre to strengthen the games cluster in the Tech Corridor” said Babita Devi, sharing the stage with EpiCentre tenant Asa Burrows of SKC Games.

“Locations like the EpiCentre help to create a vital bridge between academia and industry to help clusters to thrive. Our vision for a games accelerator at the EpiCentre will give start-up businesses the resources and support they need to grow at scale, which in turn helps create job opportunities for the local and wider region.”

Cllr John Griffiths, Leader of West Suffolk Council, agreed, adding: “West Suffolk is in the middle of this vital corridor and plays an important role as a UK economic driver. Our Council is also more than playing its part in supporting the skills agenda, and businesses to start and grow in our area, which includes international trade and transport links. It is great that we were able, with partners, to put across to Ministers, MPs and Council Leaders the significant benefits this corridor has to offer the country. It was also important they heard first-hand from businesses like SKC games.  The EpiCentre is another success story that we as a Council have invested in to help bring forward companies in the tech corridor.”

“It’s been fantastic to see so many of our great businesses and great technology, great science, presented for people” added Trevor Holden, MD South Norfolk and Broadland Councils. “It’s only when you see those presentations that you really just appreciate how strong the Cambridge Norwich Tech Corridor really is.”

Matt Windle, MD of Lotus Cars, was one of the speakers at the event. “What a wonderfully inspiring and well-attended event. The message I think came across really strong that we have the technology, we have the people, we have the industry, and we have a fantastic area perfect for investment” he said.

From environmental adaptation to food security and technical innovation, the reach and connectivity of the Tech Corridor gives it a competitive edge and makes it perfectly positioned to help deliver the UK's future prosperity. We are going to go from strength to strength as we grow more and more innovation.” Trevor Holden, MD South Norfolk and Broadland Councils

Speaking after the event, John Fuller, leader of South Norfolk Council, called for the Government’s levelling up agenda to recognise the contribution the CNTC region makes to the UK economy. “We are net contributors to the UK economy and all our tax revenues go to other places in the country,” he said.

“With successful businesses like this, we should be able to capture more of the tax revenues that we earn, to be spent for the benefit of local people; to build new homes, new infrastructure, new power – creating an economy that works for everyone in the eastern region.”

Susie Morley, leader of Mid Suffolk District Council, also pushed for future investment in the region to focus on skills. “It’s absolutely imperative that we reskill all of our young people and those finding themselves out of a job now that furlough has finished.

“We don’t want our people having to leave the area to find a job, we need to keep them here and grow our own economy.” 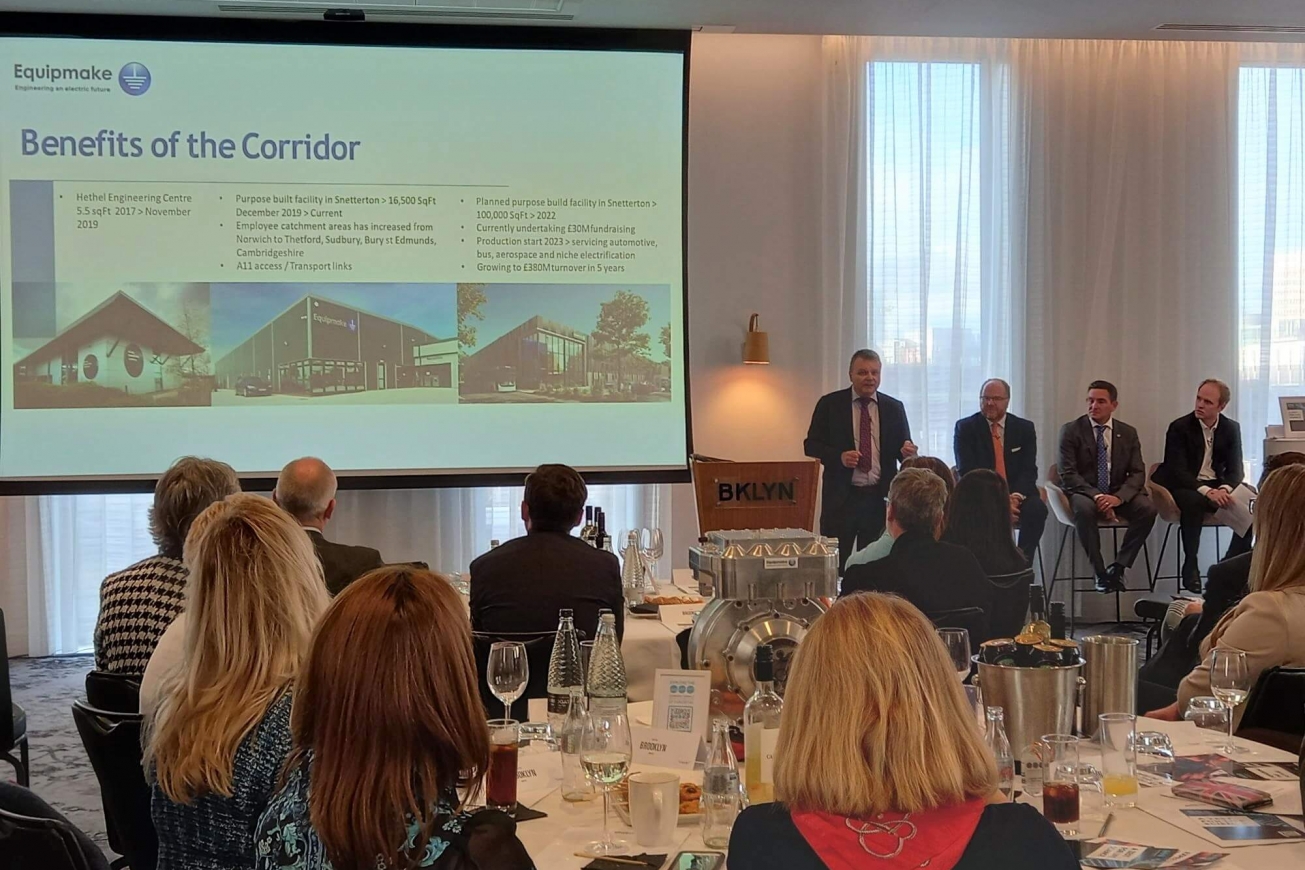 The event was held in Manchester to coincide with the Conservative Party Conference.

Cllr Sam Chapman-Allen, Leader of Breckland Council, said: “I’m delighted the partnership has now had an opportunity to highlight this tremendous potential on such a big stage.”

“It was wonderful to hear about the ambition of the region and the collaborations across the private and public sectors. ESPRC invest in high quality research in places like Cambridge and this is the kind of partnership we want to support in the future,” said Natalie Jones, EPSRC.

Susan Glossop, the portfolio holder for growth at West Suffolk Council said: “The Corridor for Life is an excellent concept. By working together to stimulate investment in infrastructure business and skills, we will continue to deliver opportunities to retain, grow and attract the most successful and innovative people and businesses, benefitting not only our region but the UK plc as a whole” 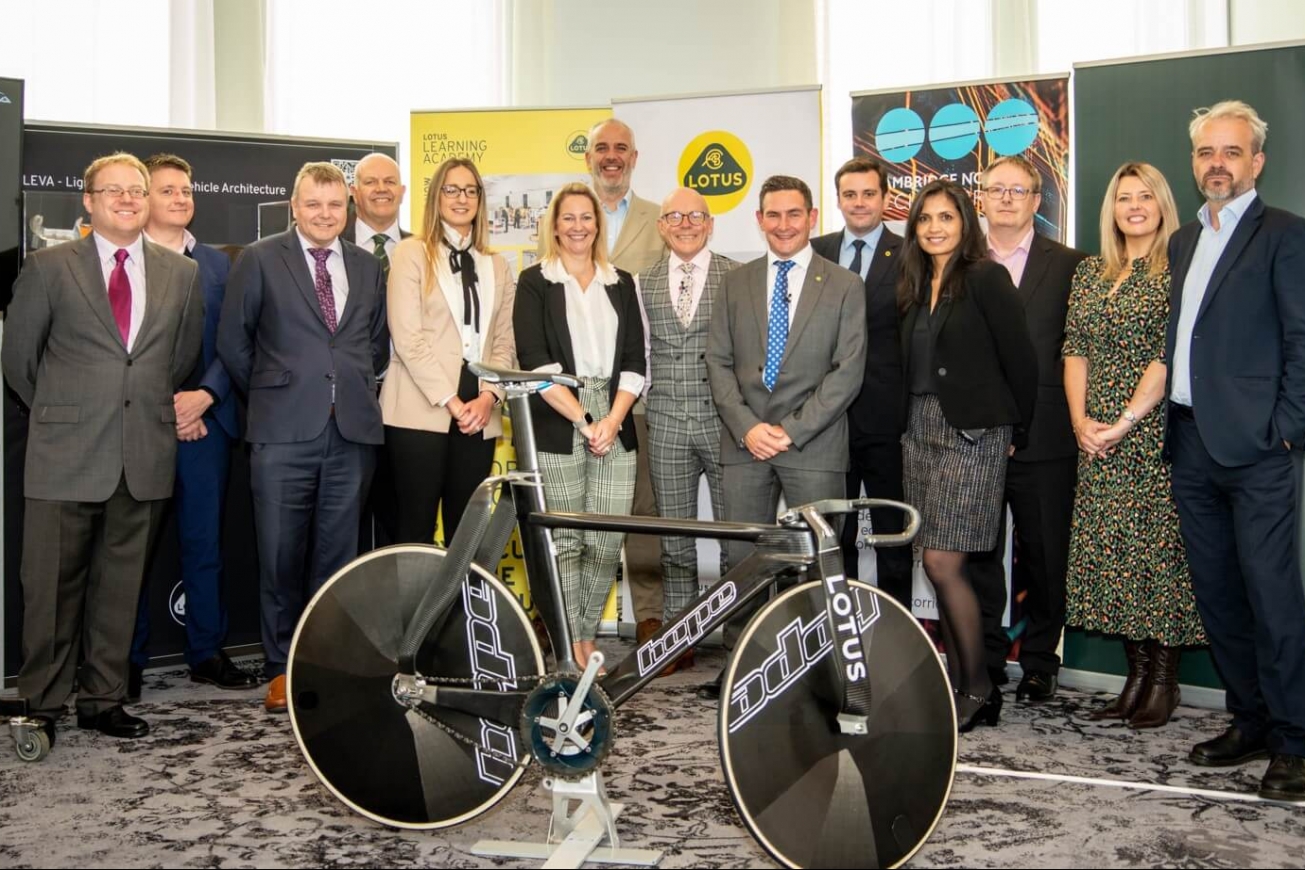 "The corridor offers unique employment and growth opportunities to both existing and prospective employers, who would bring new and better-paid jobs to our area and help create a cluster of industry." Cllr Sam Chapman-Allen, Leader of Breckland Council

Attendees of the event were also able to get closer to the tech innovation in the region via a ‘Corridor of Curiosities’ exhibition; a showcase of technology from across the Tech Corridor including the Hope Technology/Lotus Cars road bike from the Tokyo Olympics, and a rocket from Sc0ttow Park-based, space tech pioneers, Gravitilab.  SKC Games also brought along original sketches from their ‘open world’ games franchise; Taradene.

Playing during networking breaks was a showreel of the Disruptors series, a partnership project between UEA for Business, the Cambridge Norwich Tech Corridor and Archant Video. The Disruptors explores the most groundbreaking businesses in our region, sharing the stories of local innovators turning their revolutionary ideas into reality. You can catch up with the series, by clicking here.

Meet the Tech Corridor Delivery Board

Find out more about our delivery board