From the depths of one of Britain’s busiest coalmines to satellites orbiting the earth via the high-octane world of Formula One, Nick Clarkson’s career has literally been full of ups and downs.

In a quiet corner of the swanky Mirus Aircraft Seating headquarters at Hingham, Nick Clarkson is busy testing the parts that go into the company’s next generation airline seats.

One does not often give much thought to the plane’s seats when jetting off on holiday, but anyone who has spent 12 hours perched on a bad one will confirm it can really put a dampener on the start of your break.

But leaving aside the comfort aspect, safety is paramount in an industry with unrelentingly high standards, meaning Nick’s role as technical inspector is a crucial one. 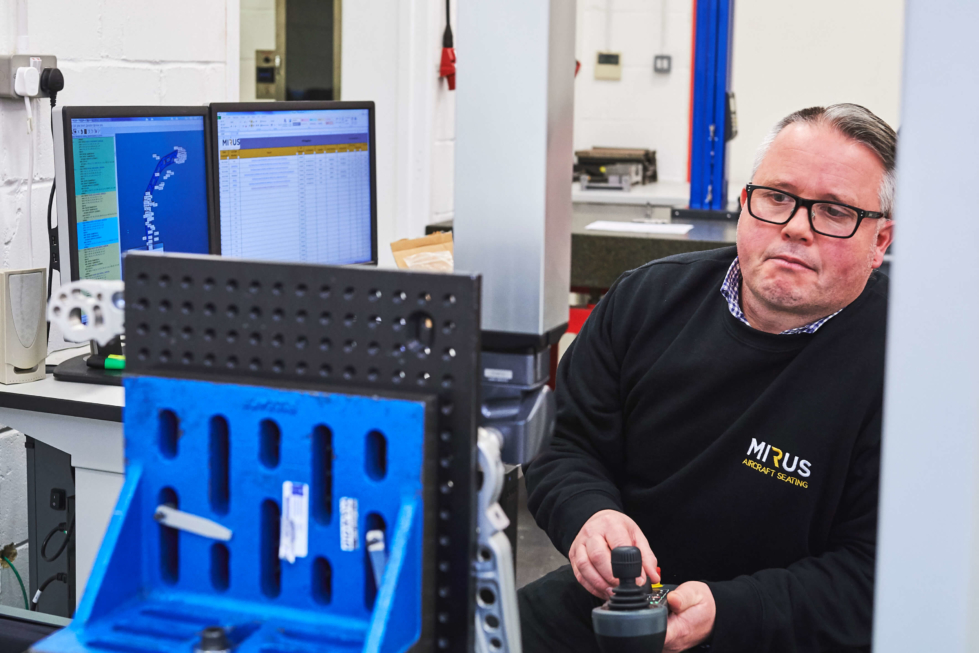 Nick Clarkson has worked at Mirus AS for two years

“It’s a really interesting job, you never know what’s going to come in and every day is different. Sometimes there’s a bit of pressure when the team are waiting on the parts, but we have an open culture here where no-one is frightened to speak up, so you just have to work methodically and try and get to the bottom of the problems.”

The role is the latest stop in Nick’s eclectic career, which has taken him from the depths of Britain’s busiest colliery to the heights of near-Earth orbit, via the high-octane world of Formula One racing.

Mirus also has heritage in F1, being based at the former innovation and technology factory of the Caterham racing team. The company has deliberately brought together technology, expertise and best practices from the worlds of Formula One, automotive and aerospace to become a sector disruptor. It creates lightweight seats, thereby cutting fuel costs and offering increased efficiency for airlines.

"We have an open culture here where no-one is frightened to speak up, so you just have to work methodically and try and get to the bottom of the problems.”

It seems unlikely the future of airline seating was at the forefront of Nick’s mind when he started his working life at Daw Mill mine outside Nuneaton. Having grown up in the Midlands, he followed in his father’s, and grandfather’s, footsteps by embarking on an apprenticeship at the colliery.

“Even though the industry was having a bad time, Daw Mill was still really busy right up until it closed in 2013,” Nick says. “I was there for five years and got trained up in all aspects of mining.”

Nick was familiar with East Anglia, from a young age, making regular visits to Lowestoft to see family and later attending evening classes to get trained up as an electrician.

“I’ve always been interested in electronics, and have tried to manage my career development so that I could periodically try different things and learn new skills. The one piece of advice I would give my younger self would be to concentrate more on my education – I had to go to night school to get a few different qualifications and that’s difficult to fit around your family commitments.”

Nick decided to move to the region full-time when his son was born, taking a job at the Sanyo TV factory. From there it was on to C-MAC microcircuits in Great Yarmouth, another electronics firm.

“We made parts to go up in satellites and for the EuroFighter,” Nick says. “My friend and I ran a pick and place machine, and were asked to go to North Carolina in the US to bring a production line back to the UK, which was really interesting.”

“That’s where I started my quality control training,” he says. “It was a great job for me as I’m a big autosports fan, though mainly Moto GP. I also got involved in the mechanical side of things, training to use a Faro Arm, which is used for mechanical inspections.”

And it was quality control that took him to Mirus in 2017. The company has enjoyed rapid growth since it was founded in 2015, refurbishing its factory with the help of a £360,000 grant from New Anglia LEP. It has since won major contracts to supply seats to Air Asia and TUI, and has other lucrative deals in the pipeline.

Nick lives in Gorleston, but is happy to make the commute across one of the most picturesque parts of the country.

“I have a bit of a drive in every day, but the roads aren’t too busy – you don’t feel like you’re part of the rat race,” he says.

“It’s a great area to work and start a family, being so near the sea rather than somewhere urban like where I grew up. I still enjoy taking my bike out and going for rides along the coast.

Nick’s passion for Mirus is easy to see: “Mirus very much operates like a race team, in that we all have to work together to produce a high-performance product. Quality and precision is critically important,” he says.

And his role is pivotal in ensuring the success of the business, with the lessons he has learned in his diverse career proving crucial to Mirus’ pursuit of and commitment to quality.

He adds: “We have a great culture here and it’s fantastic to be a part of such an exciting success story, delivering products that will transport so many people all over the world. The future is bright and I’m proud to be part of it.”

To find out more about careers at Mirus AS, see www.mirus-as.com/about/careers.

12 steps to a healthier working day

Get active and boost your productivity